I recently found myself asking the question, "Can you mine Ethereum on an AWS instance?" When the ground breaking Nvidia V100 was finally added on AWS, I knew I had to test it's mining prowess. So how did it perform? Well, the V100 is currently the world's best Ethereum ming card, but is it good enough to cover all costs?

The Nvidia V100 is currently the world's most advanced compute card. It is specifically made for AI training and other HPC applications. The V100 offers a staggering 125 teraflops (or 112 teraflops for the PCIe variant) for specific deep learning, single floating point computation. This is possible due to the card having 5,120 CUDA cores and 672 tensor cores, which dramatically aid machine learning operations. The V100 offers 15.7 teraflops for single precision computation, compared to 11.3 teraflops for the GTX 1080 Ti and 12.66 teraflops of the AMD RX Vega 64.

Additionally, the V100 packs 16 GB of HBM2 memory, whose extremely quick speeds and large bandwidth aid computation performance. All of this should mean that the V100 should perform very well at Ethereum mining, which is heavily reliant on single precision computation and quick memory.

The tricky part is getting access to a V100. I have found that it is only possible to purchase a V100 through a system integrator, such as thinkmate, and they are charging $8,000 per V100. That's quite the price for a card, although this card is normally used by businesses, so the price isn't that unrealistic.

An alternative to actually buying the card is to find a VPS that includes one, and rent it out for mining, err, performance tests. ;)

The two providers I've found that offer the V100 include AWS and Paperspace.

In addition to the normal frills of AWS, you can spin up a p3 instance with 1, 4, or 8 V100s. That's crazy power! However, don't forget that you also have to budget for storage space and network traffic.

Paperspace only offers an instance with one V100, however they are cheaper (and include free bandwidth!). If you're interested in trying out Paperspace, you can sign up here using my affiliate link, where you will get a $10 credit (and I will earn a $15 credit once you spend more than $25).

However, since I had some AWS credits, I decided to use AWS for these tests.

I spun up a p3.2xlarge instance based on the Deep Learning Ubuntu (Cuda 9) AMI. It's important to note that the V100 requires Cuda 9 to work. Using this AMI is perfect because you don't have to spend half an hour downloading and installing all the packages required to utilize the V100; this just works straight out of the box.

For mining software, I tested both ethminer and Claymore.

If you are not using an AWS instance (or not using the Deep Learning Ubuntu AMI), you can use the ubuntu-miner-and-cuda-setup.sh shell script I made. This script will install CUDA 9 on the Ubuntu machine, along with giving you the options to install ethminer, Claymore's Dual miner, and xmr-stak (CPU and GPU Monero miner) (NOTE: I've noticed that xmr-stak fails to compile on some machines, so your mileage may vary).

Straight out of the gate, Claymore failed to detect the V100 (see image below). There is an open issue for this bug, so it might get resolved. 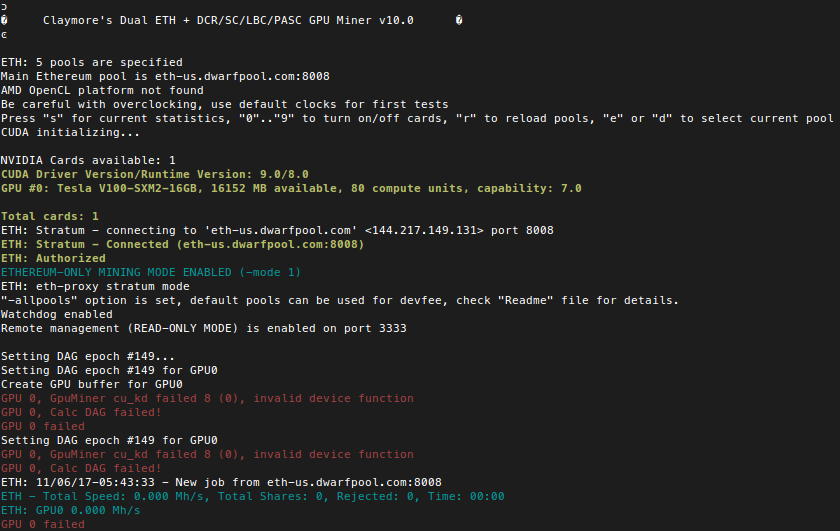 ethminer had no issues with the V100, and started mining less than a minute after starting the program. This beast instance had no problem building the DAG in seconds. I ran ethminer with the following command:

Using these settings, the V100 was able to mine at 90Mh/s. Here is the system after mining for 48 minutes: 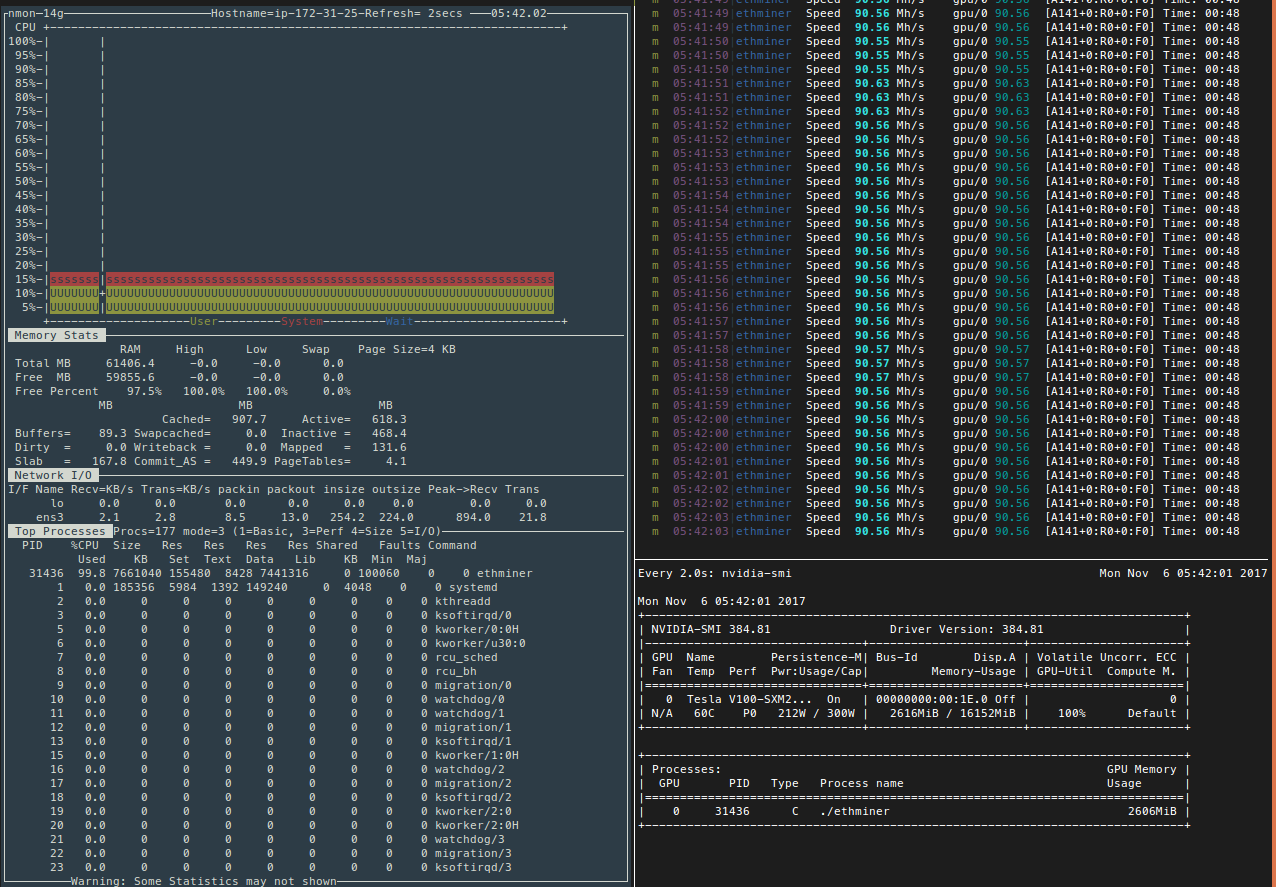 So is 90Mh/s enough to cover the server operating costs? Let's look into this.

At today's mining difficulty and Ethereum price ($293), a machine producing 90Mh/s would generate about 0.014 Ethereum per day, or about $4.07 per day in revenue. 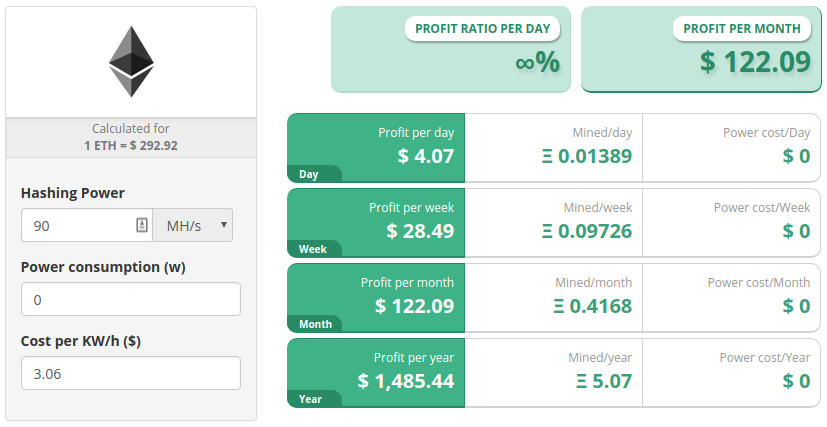 However, after taking the instance costs into consideration, the final profit would be about -$70 per day. In other words, you would be loosing about $70 per day if you used a p3.2xlarge instance to mine Ethereum. 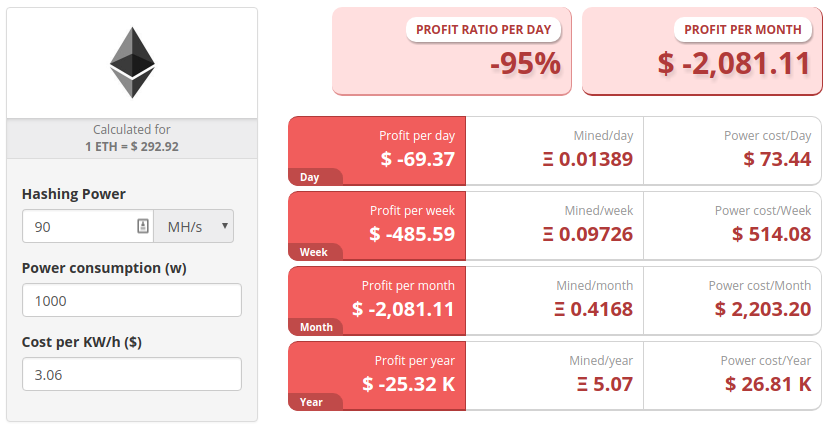 You couldn't even use a p3.2xlarge spot instance to mine profitably because it is still too expensive per hour. Currently the spot price in the US East AWS region is about $0.674 per hour, whereas the instance would generate about $0.17 per hour in revenue, costing you over $0.5 to run the instance per hour.

Even though the V100 is currently the world's most powerful Ethereum mining card, the large cost of acquiring or renting one make mining with it unprofitable.

Ultimately, this was an exciting experiment. It's fun to think about the economics of cloud mining crypto coins, and reasons why it often doesn't make financial sense. If you are serious about mining, you have to take the risk and acquire the hardware yourself.

Since this didn't work out profitably, I'll be sticking with local GPU mining. :)