After two years of hard work, my cofounders and I finally launched our company last month. Having just passed our five-week mark, I can confidently say that we are on something big. To celebrate this, along with giving myself my first long vacation in years, I decided to go solo backpacking through central Europe for a month. A sabbatical of sorts.

Since I put most of my savings in the company, I don't have many funds available. Thus I'll be traveling minimalist. I'll be staying in hostels, riding the rails with a Eurail pass and having plenty of picnics. In all honesty, though, I enjoy this humble style of traveling more than splurging on unnecessary conveniences (this could have to do with me still being young; I'll have to wait a few decades to determine if this is true or not, haha).

I'll be flying into Amsterdam before starting a large, clockwise circle through Germany, the Czech Republic, and Austria. Here is a simple map showing the trip route: 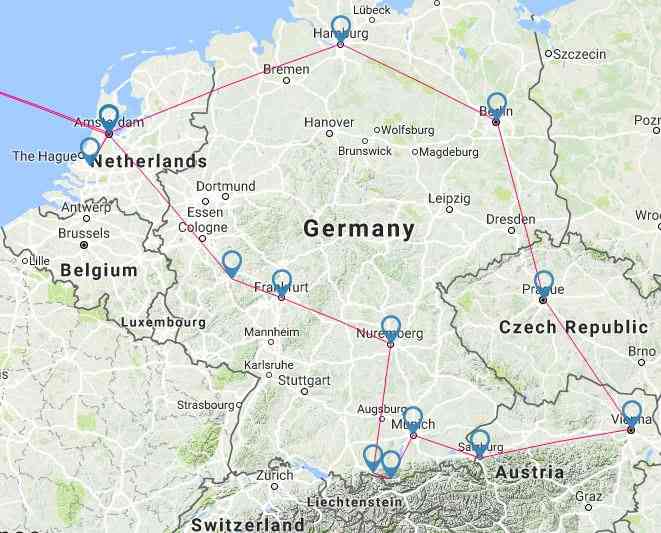 I will stay three nights in Amsterdam, visiting a few art museums (Rijksmuseum, Van Gogh Museum), the Heineken factory (free samples!), and the canals. I'm also eager to spend a few hours biking around the countryside outside the city. One of the days will be spent taking a day trip to Rotterdam, mostly to see the SS Rotterdam, a transatlantic steam liner from the '60s that has been transformed into a hotel (minus asbestos).

Hamburg will be the next stop after a five-hour train ride. It'll be great to walk along the water front and around the warehouse district. Hamburg has a rich maritime history with many retired ships open for tours. Also, the hostel I'm staying at (Backpackers St. Pauli) for two nights should be one of the most chill hostels of my trip. The graffiti on the side of the building definitely adds character.

Next will be Berlin, which will be a sight seeing sprint. From the Berlin Wall and Brandenburg Gate, to the Computerspielemuseum Berlin (Computer Games Museum) (I'm a nerd after all), Clasic Remise Berlin (classic car museum) and Pergamon Museum, the two days I'll be there will be breathless.

To recover from that sprint, I'll spend the next three nights recovering in Prague. I did splurge here and reserved an AirBnb (for less than the prior hostels per night...). I have a feeling that I'll really like Prague. Cheap food, cheap beer, beautiful architecture and hidden gardens (beer and flower varieties) make the city very attractive. Maybe I should remote work from here...

Up until this point, I'll have ridden exclusively on high-speed trains with Deutsche Bahn (DB; the German rail company). But from Prague to Vienna, I'll have the pleasure of taking ÖBB's RailJet. With a name like that, you know the trip will be good! The two nights in Vienna will allow for a restful period while basking in classic music history and historic sites.

Thereafter, I'll take a short train ride to Salzburg. I'm not sure how eager I'll be to partake in all the Sound of Music festivities and tours, but I'll definitely enjoy exploring the town. I might even do a day trip out to Hallstatt to see the picturesque town on the water's edge.

An early morning train will take me to Munich where I'll only have one day to explore the city before moving on. Octoberfest will be in full swing by the time I arrive, so the city will be crazy. I'm only spending one night there because I don't feel like paying three times the normal hostel price per night where the 10-bed dorm will probably be intense. With an early start, I'll do a grand walk around the city, stopping by Marienplatz, English Garden, the BMW Museum, and Nymphenburg Palace before going to the Octoberfest grounds. I'll call it an early night soon thereafter, since I have another early train the next morning.

No trip would be complete without going to the top of some great landmark. Well, I'll ascend Zugspitze, the tallest mountain in Germany at 9,718 feet. Fortunately, I won't have to do all the hard work myself. There is a handy cable car that delivers delicate souls like me from the base to the peak. An early train from Munich will drop me off in Garmisch-Partenkirchen, where I'll be able to get to the base of Zugspitze by 8 or 9 AM. There'll be plenty of time for exploring the mountain and surrounding areas. Because of the remoteness, I have a lovely AirBnb to look forward to back in Garmish-Partenkirchen, so I can get some good sleep before "Castle Day".

Another early train will take me from Garmish-Partenkirchen (Germany) back across the Austrian border to Reutte (Austria), where I'll hike an hour out of town to the Ehrenberg Castle ruins, which should be a magical experience. But what fun is only seeing one castle in a day? So I'll hike back into town and take a bus back over the border to Germany and get off at Füssen (Germany). Once there, I'll hike up to the world famous Neuschwantstein Castle. Depending on the crowd, I may or may not actually tour the inside (since I'll be arriving late). In any case, I hear the inside is underwhelming. I will be happy just walking around the complex. Füssen is a little bigger than Garmish-Partenkirchen, so it'll be back to hostel life.

Getting back to civilization, the next morning I'll take a train to Nuremberg (via Munich). From this point on, my travels will start heading back north to Amsterdam. However, there is still plenty to see on the way North. I'll use the next few days to recharge myself after the prior three-day sprint. Spending two nights in Nuremberg, I'll use the first day exploring the unique central city, while spending the second day visiting the DB Museum (train museum... I can't help myself) and a few of the Nazi monuments and museums (including the rally grounds).

I'll make a quick one night stop in Frankfurt. I haven't found much to do there, and all the hostels are in a seedy area downtown by the central train station. So, my expectations are pretty low for this stop. But it's alright because the next day will be another Castle Day!

A short train ride out of Frankfurt is the beautiful Rhine river valley, where there are dozens of castles straddling the river between Mainz and Koblenz. Taking an early train out of Frankfurt, I'll hop on and off the train at Rheinstein Castle, Rheinfels Castle and Burg Eltz before heading to my AirBnb in Koblenz.

After some morning exploring of Koblenz, I'll take a mid-day train back to Amsterdam, arriving at dinner. I'll take in Europe for the last time that night, as my flight back to the US leaves early the next morning.

If you made it this far, you might also be interested in the things I am packing for this month long backpacking trip. I have the trusted Osprey Farpoint 40, which is a 40L trekking backpack. This bag is perfect because it easily works as a carry-on, while still being durable and spacious enough for plenty of gear.

Through the magic of light packing, I fit all of this stuff in the bag: 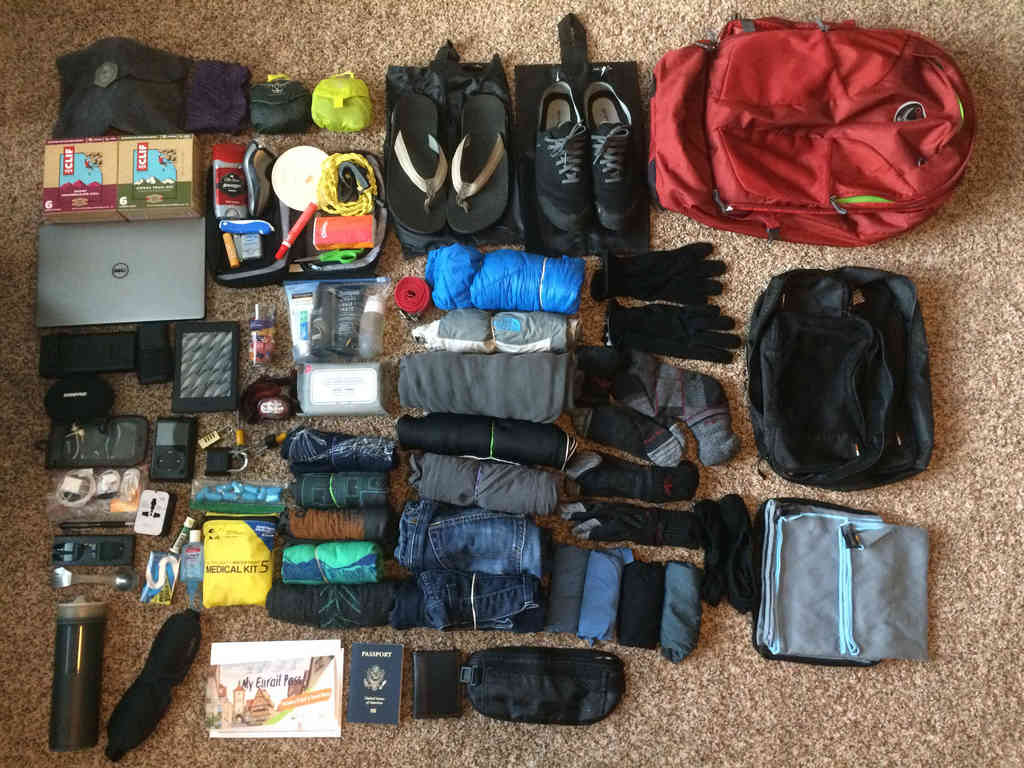 I am making use of quick drying fabrics so that I can do sink laundry daily (or every other day). My t-shirts (5) and socks (6) are all merino wool, which is very breathable, light, quick drying and resists body odor. I'll be using ExOfficio underwear (4), the underwear used by countless travelers for its quick-drying synthetic fabric that resists odor.

By making use of packing cubes (black rectangles on the right), it is easy to compress and organize all the clothes in the bag.

In the top left you can see my trtl travel pillow, which folds away nicely and will be a godsend on my flights. Next to it I have my merino wool BUFF, along with a rain cover for my bag and an Osprey Ultralight pack (my day bag).

I have to take my laptop for the occasionally remote checkups I have to do on the automated systems I set up for work. Technology and software really like to break when left on their own. But my work enables this lifestyle, so it's a give and take.

Of course, I have my fully stocked med kit. Safety first kids!

With everything packed up, here is a picture of the bag. I'd say it ways a touch over 20 pounds. 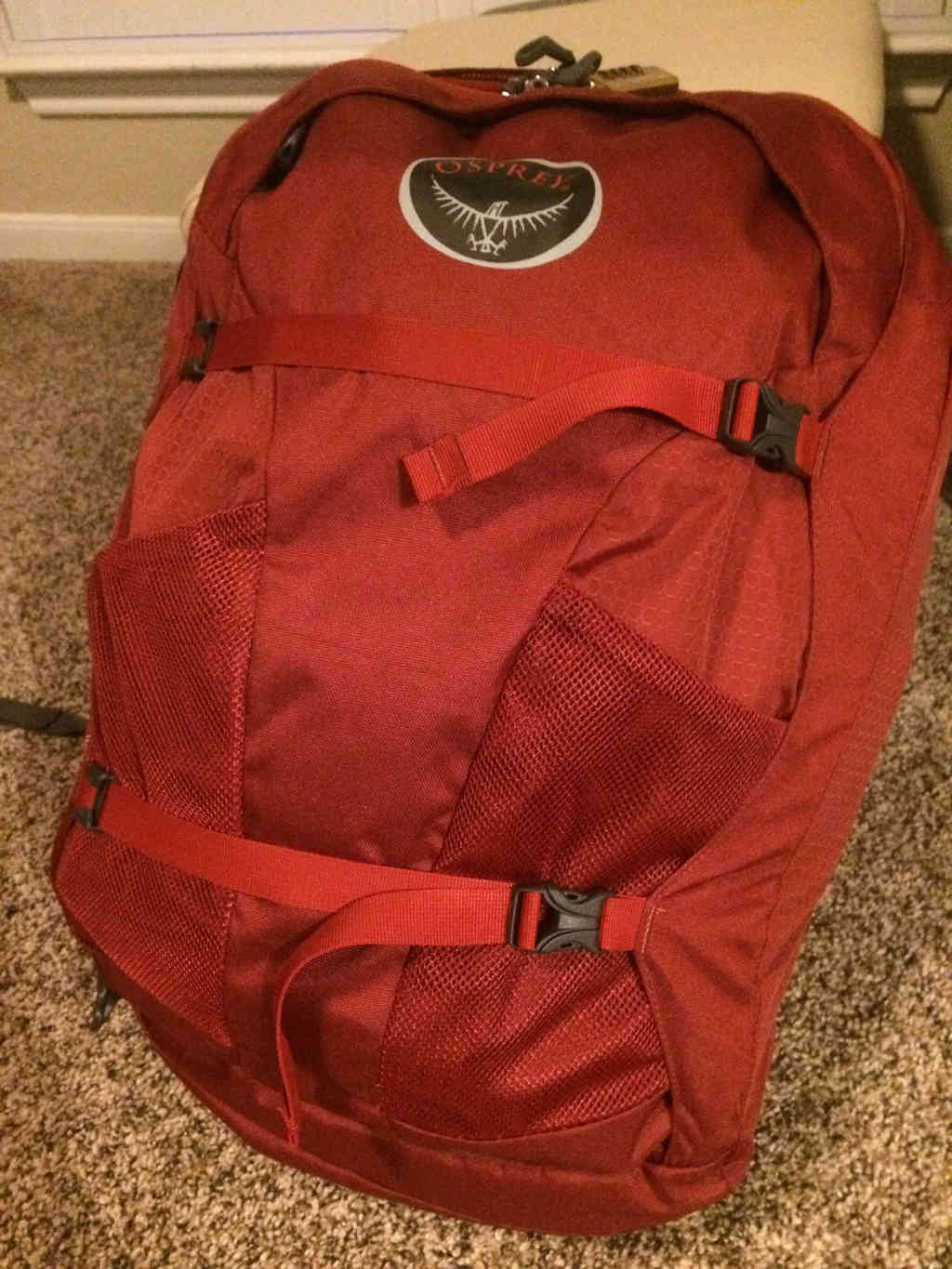 You may have noticed that I am a voracious researcher. I'm a thinker, so I like to at least think about everything that might happen. Some might view my planning as removing the spontaneity of traveling. I view it as sketching the outlines of a picture before I leave and adding the detail as I travel. This way I'll know that in the end, I'll have a complete drawing.

I hope that you've enjoyed reading about this grand trip I'll be embarking on. I'm about to head off to the airport to start this adventure.